1908 – Henriette HUCHARD was born in Paris. At the age of 6, she calls for her first painting box and as early as 1923 is awarded her first drawing and water-colour prizes from the Societe Philotechnique of Villeneuve-Saint-Georges where she lives with her parents. Her father, an autodidact, works as a foreman in a mirror manufacture in Paris and devises bevelling machines for mirrors. Her mother worked for a while as a dressmaker for Jeanne Lanvin.

1926 – As Henriette is still very young, she marries Lucien Huchard, a lithographer drawer who happens to be a highly valuable help in her work. They share a passion for fine arts which will last for 67 years. Full of creativeness, enthusiasm and munificence, they live with their daughter born in 1946 in places they make look beautiful and welcoming (in particular the studio located 26 rue des Plantes at Paris 14th).

1930-1935 – Henriette Huchard enters the Ecole Nationale des Beaux-Arts in Paris (Fine Arts National School), joining Lucien Simon’s atelier together with Lucien Fontanarosa, Yves Brayer… She is awarded prizes from the National Competitions in Plastic Arts of Paris and medals by the Ecole Nationale des Beaux-Arts, and graduates from the State and the City of Paris as a teacher in drawing.

1935–1945 – Henriette engraves her drawings in glassware she ornaments with gold and silver touch-ups: mirror, draught-board, piece of jewellery, table, draught-screen, chess-board, desk-pad…. These engraved glass works are displayed in various exhibitions. A chess-board is awarded a prize at the Salon des Artistes Décorateurs (Decorators Artists Paris Show) in 1939. Elected member of the selection committee of the Salon de l’Imagerie, she manages the Pedagogy Department.

1936–1975 – Henriette dedicates 40 years of her life to teaching drawing in Paris, mostly in the 14th district. Over all these years, she patiently helps young students attending « special class » to overcome their disabilities. She devotes time and energy to them and organizes exhibitions with huge panels which rouse enthusiasm with all sorts of public. In 1961 she is promoted to the Order of the Palmes Académiques.
At the same time, her skills in drawing and colours show manifold facets in terms of design, supports, materials : gouache – oil – engraving – tapestry – moulding – wall decoration. In 1971 she decorates two aluminium panels (7m x 3m each) for the large Tourist Class Grand Salon of the liner SS France.

1975-1994  – Henriette Huchard keeps painting landscapes prompted by varied countries she discovers during travels abroad (Mediterranean basin, India, America…) and during stays in the Loire Valley, in the Auvergne and Provence areas. Other themes can also be seen in her figurative production: clowns and mannequins, a mythic Queen, Saint Catherine, the subject of a 35m2 mural decoration… She sells a great number of works while taking part in art shows and individual or collective exhibitions: in Paris and its area, Orleans, Clermont-Ferrand and in the Auvergne area, in Lyons, and Washington D.C. in the US. She is awarded numerous prizes and medals for her works and professional run.

1990-2007  – The 90s show a change in her art from figuration to a form of abstraction. She paints a large quantity of works mostly on paper, all of the same size, sometimes mixing gouache, she uses in an original way, with stuck materials : “gouaches and collages with spouting and original rhythms, showing harmonies at the same time flashing and delicate. Themes are not missing and can be found through some figurative signs”. Such themes are coming back recurrently: they express not only her moods, ideas, people she meets … but also facts of society and terrors of the world. She also achieves about ten clay pieces and takes part in several art shows.
In 2007, Henriette Huchard who should have been ninety nine on the 17th of May still works a few hours per day. At the end of April, she stops working struck by pneumonia. She lies in the Montparnasse churchyard by the side of her husband Lucien Huchard who died in 1993. In September 2007, her gouaches of the last period are hung in the Montparnasse Art Gallery in Paris 14th. 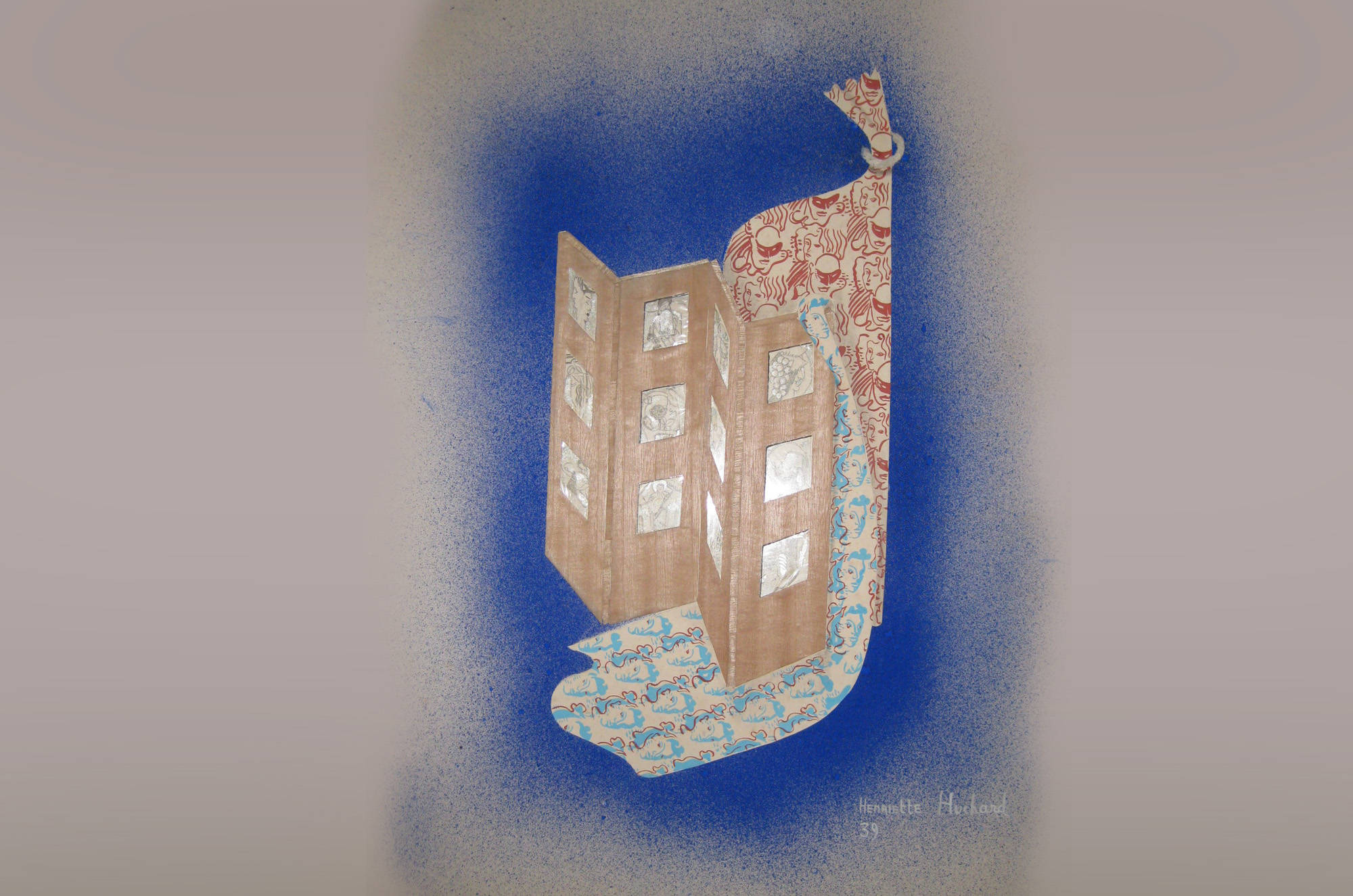 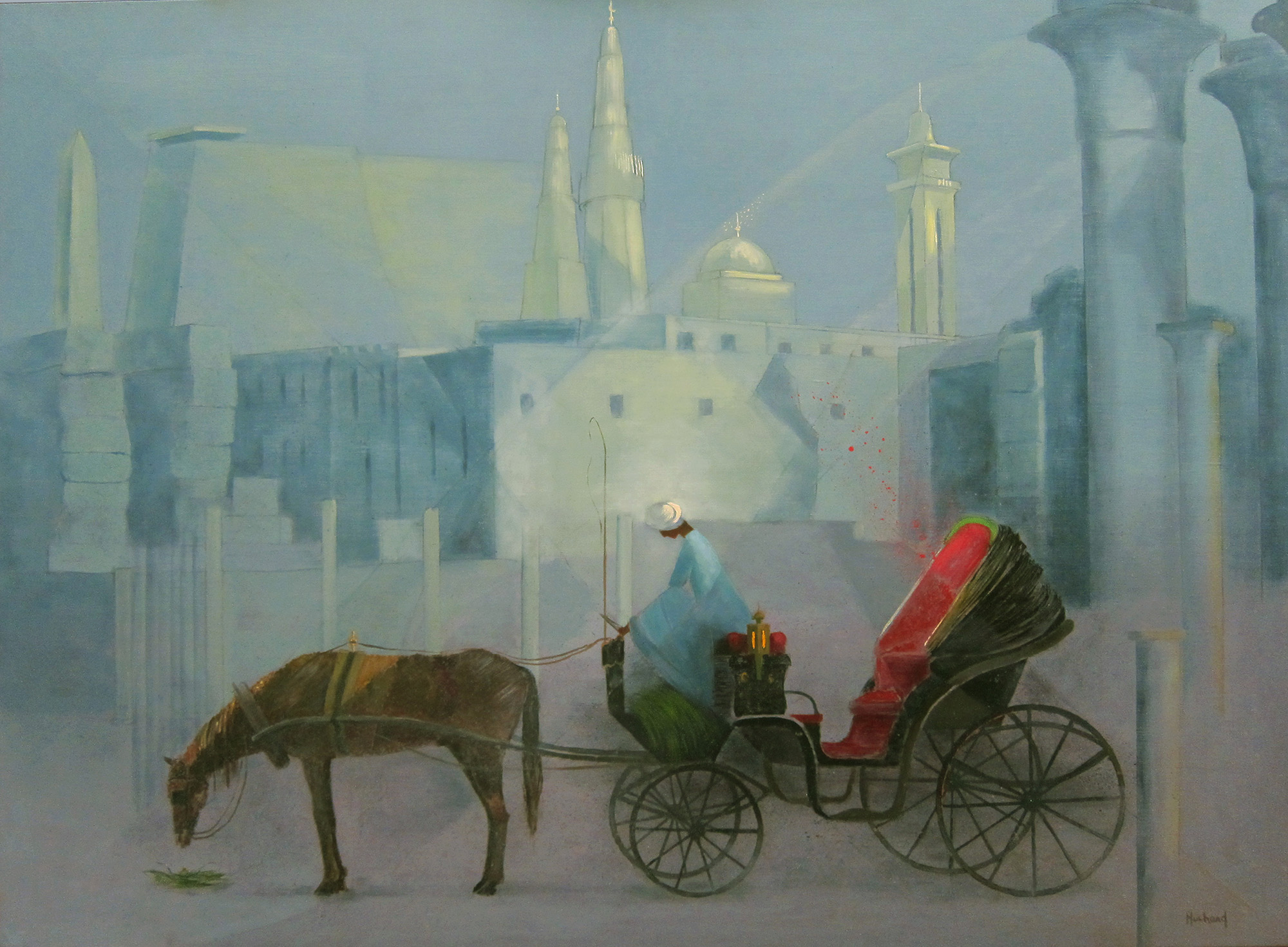 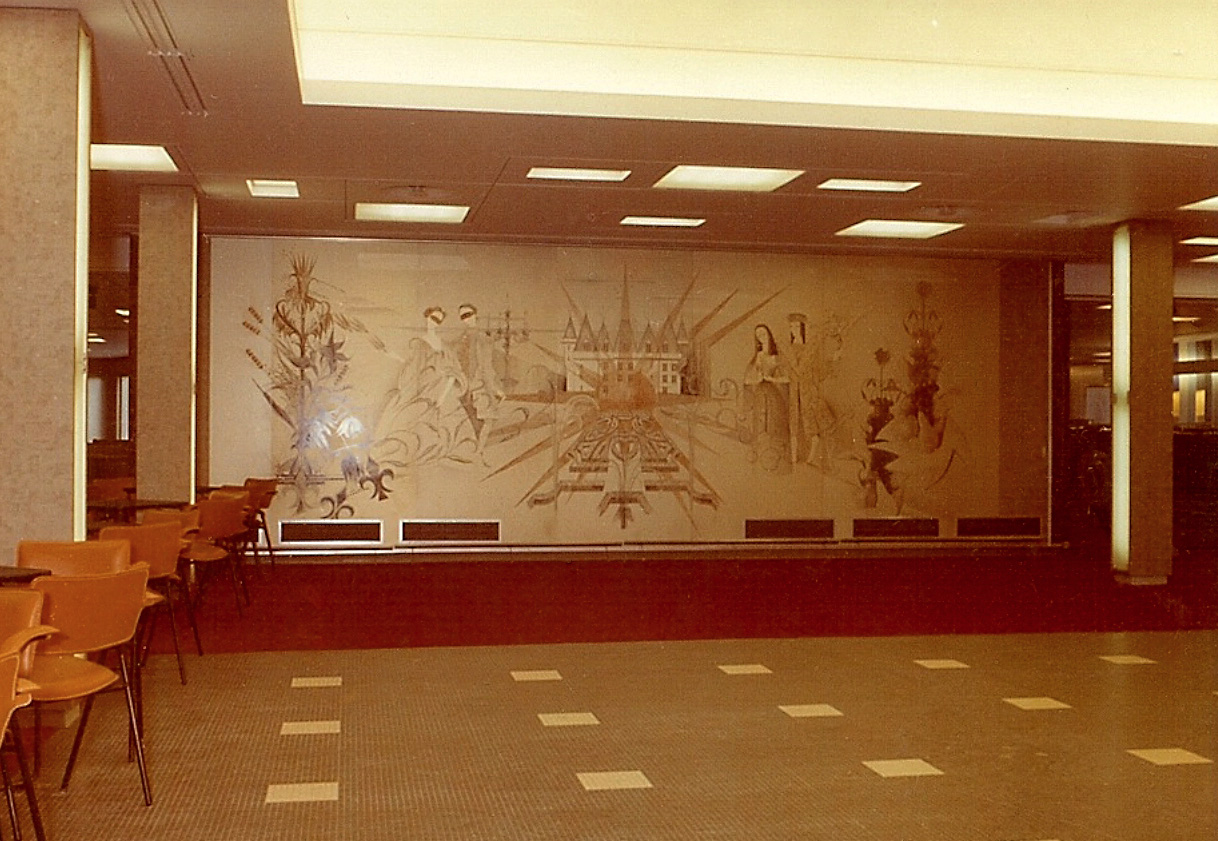 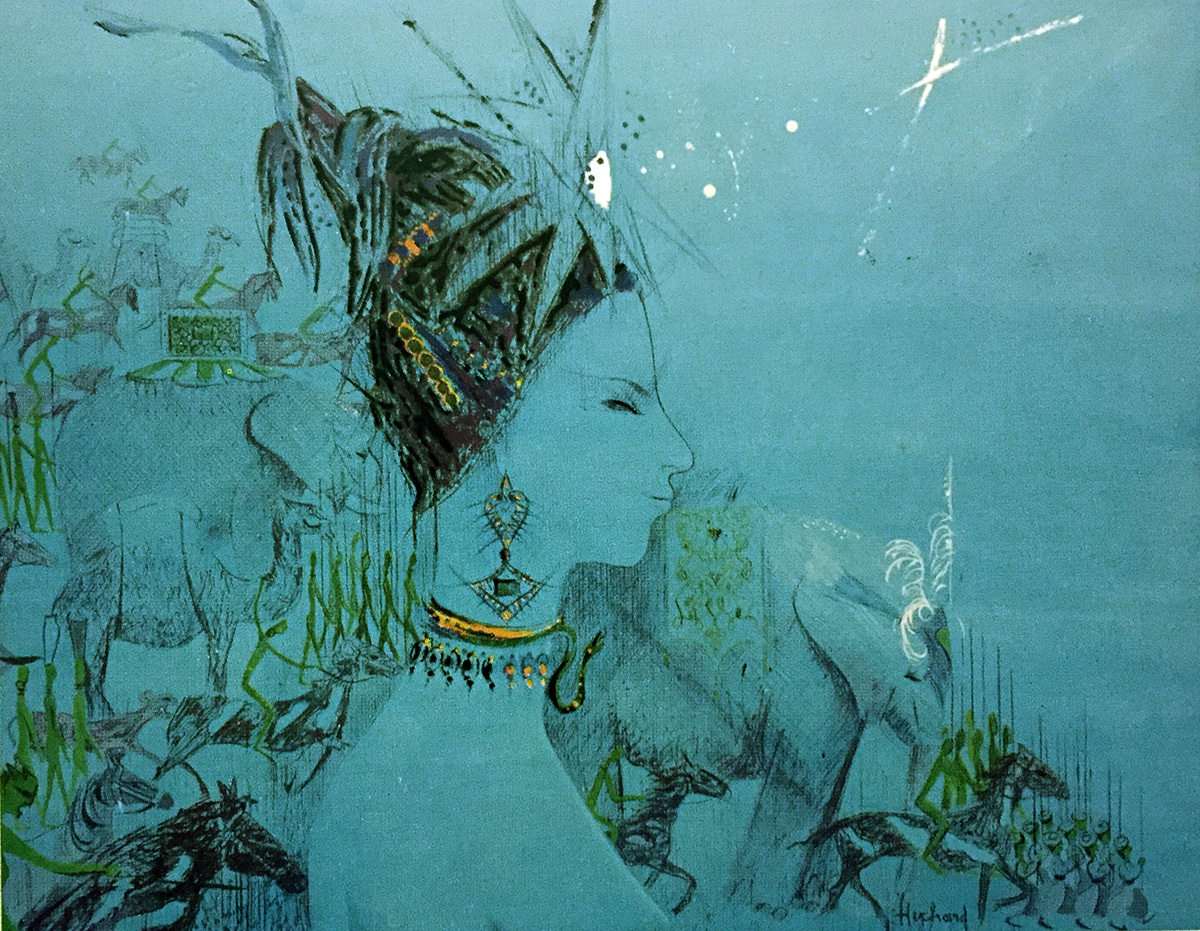 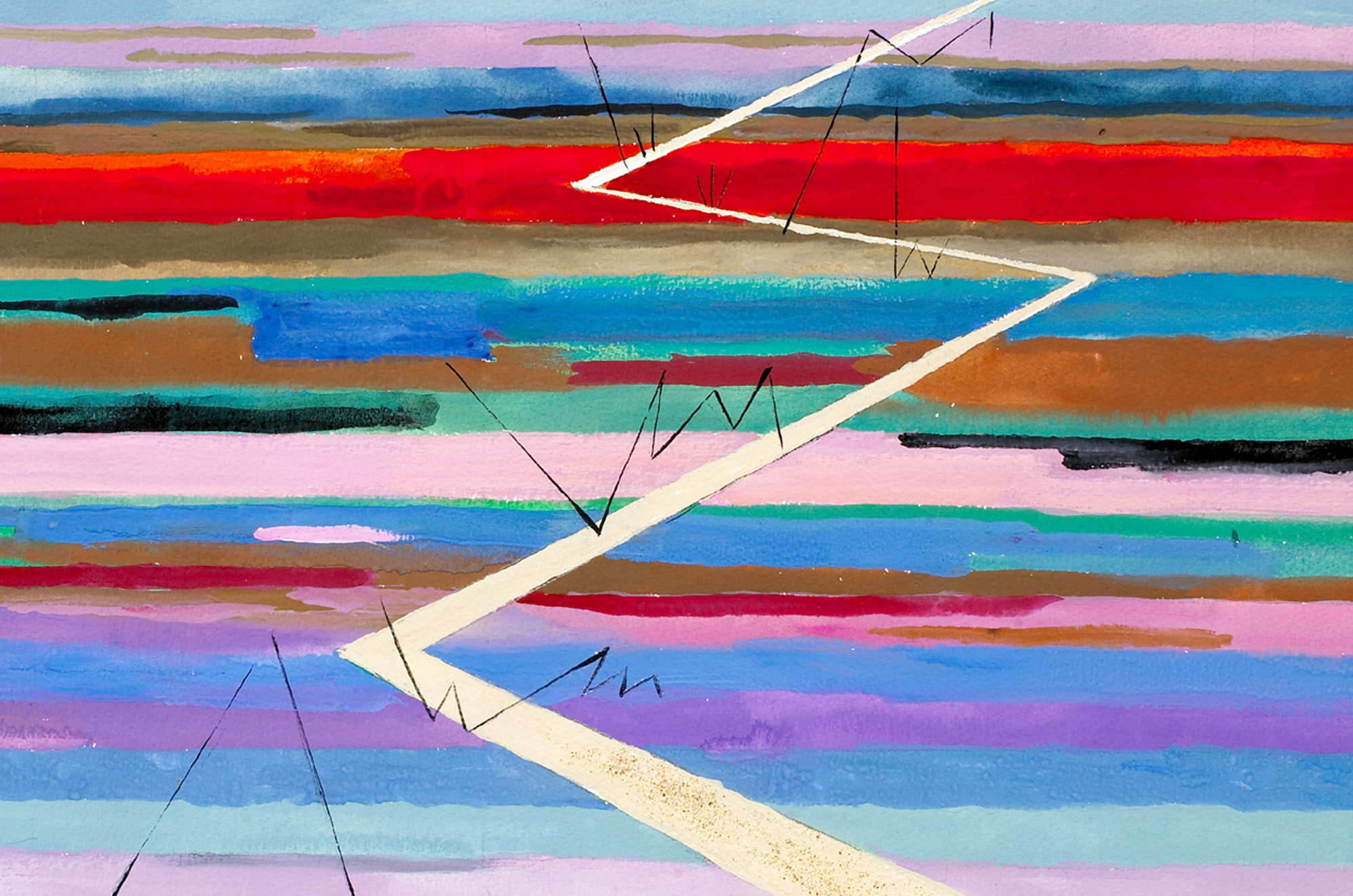